Instead of using ordinary buttons and pins to stitch up clothes, Korean-born artist Ran Hwang creates amazingly large installations of birds and cherry blossom trees. When you look up close, the amount of individual buttons is somewhat overwhelming, but from afar, the installation transforms into one breathtaking image. No adhesive is used so the buttons are free to stay and move, which implies the genetic human tendency to be irresolute. She uses buttons because  according to her they are common and ordinary, like the existence of human beings.

Hwang graduated from the School of Visual Arts in NYC and has exhibited her work in New York, Paris and Seoul.

Enkel Dika is the name

Friday is here and I couldn't think about a better thing to post today than this. Some time ago I've found this amazing artist, Enkel Dika, who makes awesome art.

Enkel has come with some of the best T-shirt arts I've seen in a while... these are some truly groovy, psychedelic pieces, and I bet most of you will love it as much as I did. He's done work for Threadless and has won some awards there, so I recommend you to check his portfolio for even more of his stunning illustrations. What's the color of your money?

We never really pay attention to the notes in our hands when we are paying someone for their services. Sure, designing a currency note is not a subject in art school and nobody really expects currency notes to stand out in  terms of beauty. They are regular piece of colored paper with which you get what you want. Well, at least that's what happens most of the times. But these countries have it good. And they show exactly how to differentiate between monopoly money and real money.

A colorful five dollar Australian note. In 1965, Australia adopted the name "royal" for its currency, but it was later dropped in favor of the dollar.

A note for one Egyptian pound.

A 20 rand note from South Africa. Each in this series of banknotes features a different animal from the "big five".

A 500 baht note from Thailand.

A Surinamese ten dollar note. The dollar replaced the Surinamese guilder in January 2004.

A one lempira note from Honduras. The note is named after Lempira (d. 1537)  who was a war captain of the Lencas of western Honduras in Central America during the 1530s, when he led resistance to Francisco de Montejo's attempts to conquer and incorporate the region into the province of Honduras.

A 1000 rupees note from India. The text on the left hand side of the note has 1000 rupees written in the 18 major languages that are spoken in India, including English and Hindi.

The front and back side of Costa Rican banknote for five colones. It shows Rafael Yglesia Castro, president of Costa Rica from 1894 to 1902 and a Guaria Morada orchid, Costa Rica's national flower.

South American countries do have a penchant for colorful and exotic things, including their bank notes. My personal favorites are  Costa Rica, Honduras and Suriname and I hope to visit these places one day. What say?

Funny pic of the week 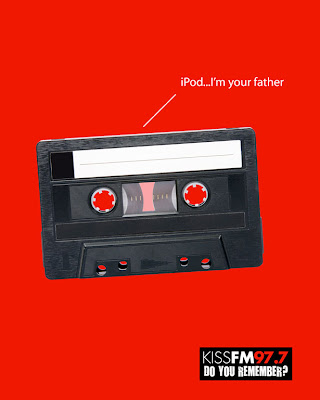 Hope you readers have a nice weekend.
Posted by C.T at 6:43 PM No comments:

It's every woman's dream (and sometimes a man's as well) to have perfect looking, coiffured hair at all times. And if only money, time, occasions, lack of resources and weather did not stand in the way of us getting our dream look and looking like the belle of the ball. Now, I don't know how they do this, but I do hope they get it patented.

After some snooping around on the internet, I finally figured who the creator of these creative and unique enterprise is. The hair set is the creation of Japanese art director Nagi Noda who previously created the poodle exercise video. Her website calls theses ‘hair hats’ which are styled into the form of various kind of animals such as a lion, rabbit, elephant, rhino and many others using hand crafted hair weaves that are made using a mold or mesh of wire.

Phew! And all this time I was hoping these do not turn out to be photoshoped or wigs. Hale Nagi Noda!!. You can see more on  Hair hats.
Posted by C.T at 12:26 AM No comments: 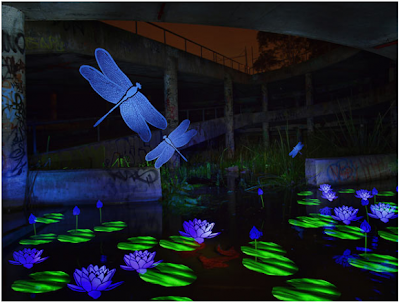 Tigtab is an artist who finds inspiration in melancholy. She says she finds "beauty in decay – those abandoned and forgotten places all around us. By bringing light into the darkness of each space, it fills that space for a moment in time, and highlights both their beauty and impermanence."

Tigtab is an artist from Melbourne, Australia and keeps her identity a close guarded secret.  She works under the cover of darkness and works with stencils. 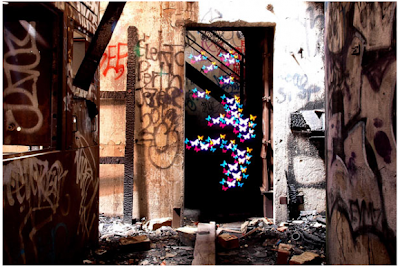 The stencils are placed on light boxes lined with silver foil. The intricate designs are revealed after a burst from a camera flash lights up the inside of the box very briefly. 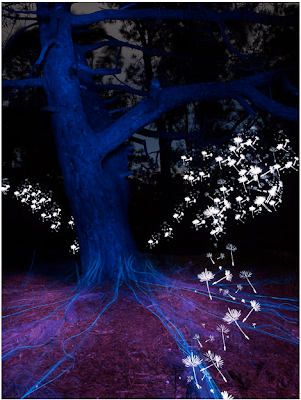 The results are marvelous and none of this work is computer generated.
Posted by C.T at 12:12 AM No comments:

Puja Bhargava graduated in Accessory Design from NIFT, Delhi (1997) and is a certified Gemologist. This is an assorted collection of her jewelry. The fabric and wood one is one of my favorites.